Ripley's Believe It or Not! - Baltimore, MD - Review 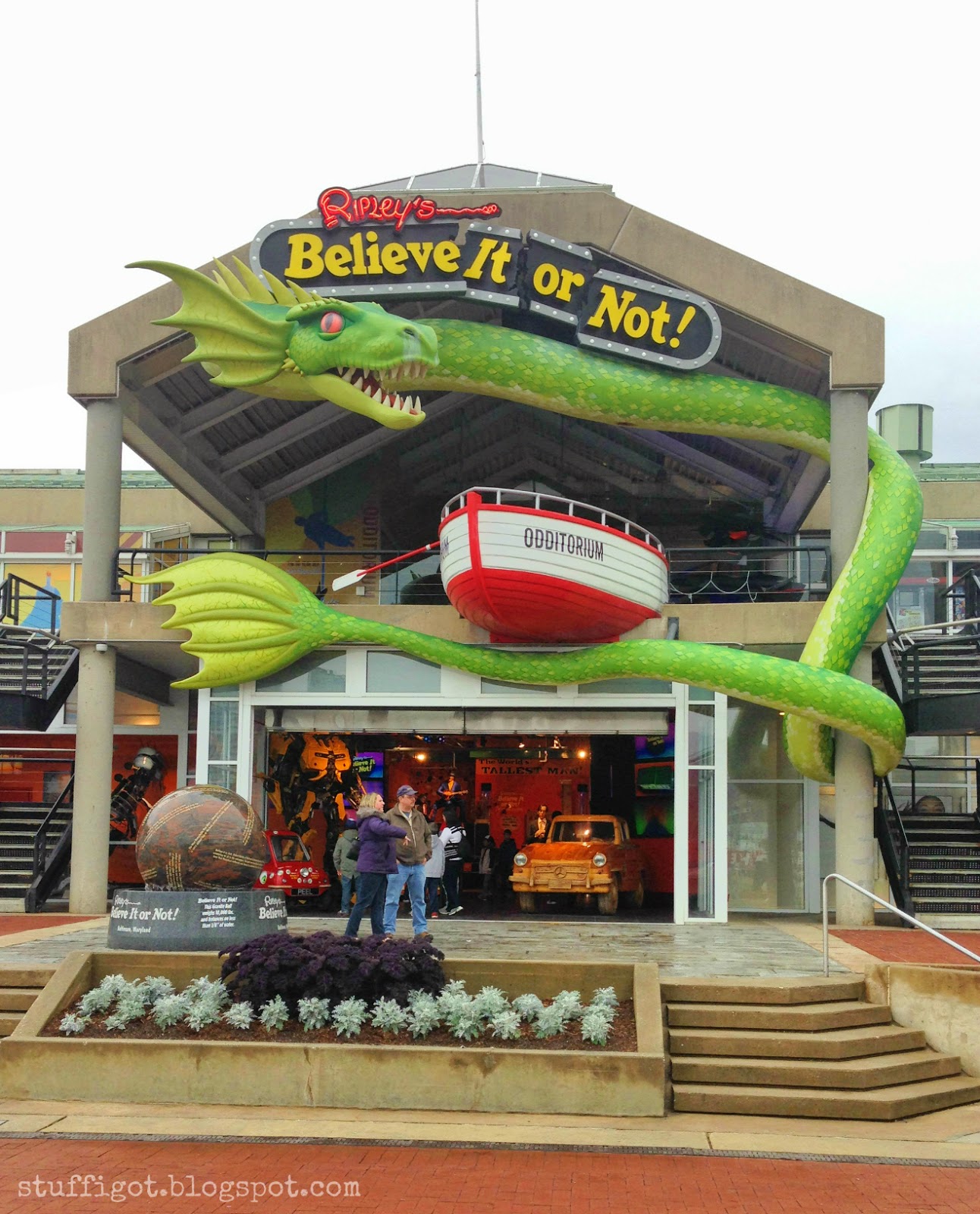 DISCLOSURE:  This is a sponsored post in conjunction with USFamilyGuide.com.  I received free admission in exchange for a review.  No further compensation was provided.   All opinions are my own.

As many times as we've been in the vicinity of a Ripley's Believe It or Not museum, we've never had the chance to actually visit one.  Recently, we got the opportunity to go to the one in Baltimore's Inner Harbor. It opened in the summer of 2012 in the Light Street Pavilion of the Harborplace waterfront complex.

It's not hard to miss.  There's a giant sea serpent named Chessie wrapped around the front facade. My boys weren't really sure what to expect when we told them we would be visiting a Ripley's museum.  But, as we walked towards the museum, I could see their excitement building.

We visited on a cold, rainy Saturday morning.  Visiting the museum then seemed like the logical thing to do.  The museum had only been open about an hour, so it wasn't too busy yet.  There were several people just hanging out outside, looking at the exhibits in the doorway.  There's a 12-foot tall sculpture of the Transformer Bumblebee made entirely of scrap car parts.  I didn't manage to get a picture, though, since there were several people blocking him!  If you look hard at the picture above, you can see him below Chessie's tail.

You purchase your tickets at the counter at the front of the museum.  There are three separate attractions at Ripley's Believe It or Not, each requiring separate admission.  The Odditorium is the main attraction, boasting over 350 exhibits and artifacts in 10 themed galleries.  There's also the 4D Moving Theater and the Marvelous Mirror Maze.  We were given tickets for all three attractions. 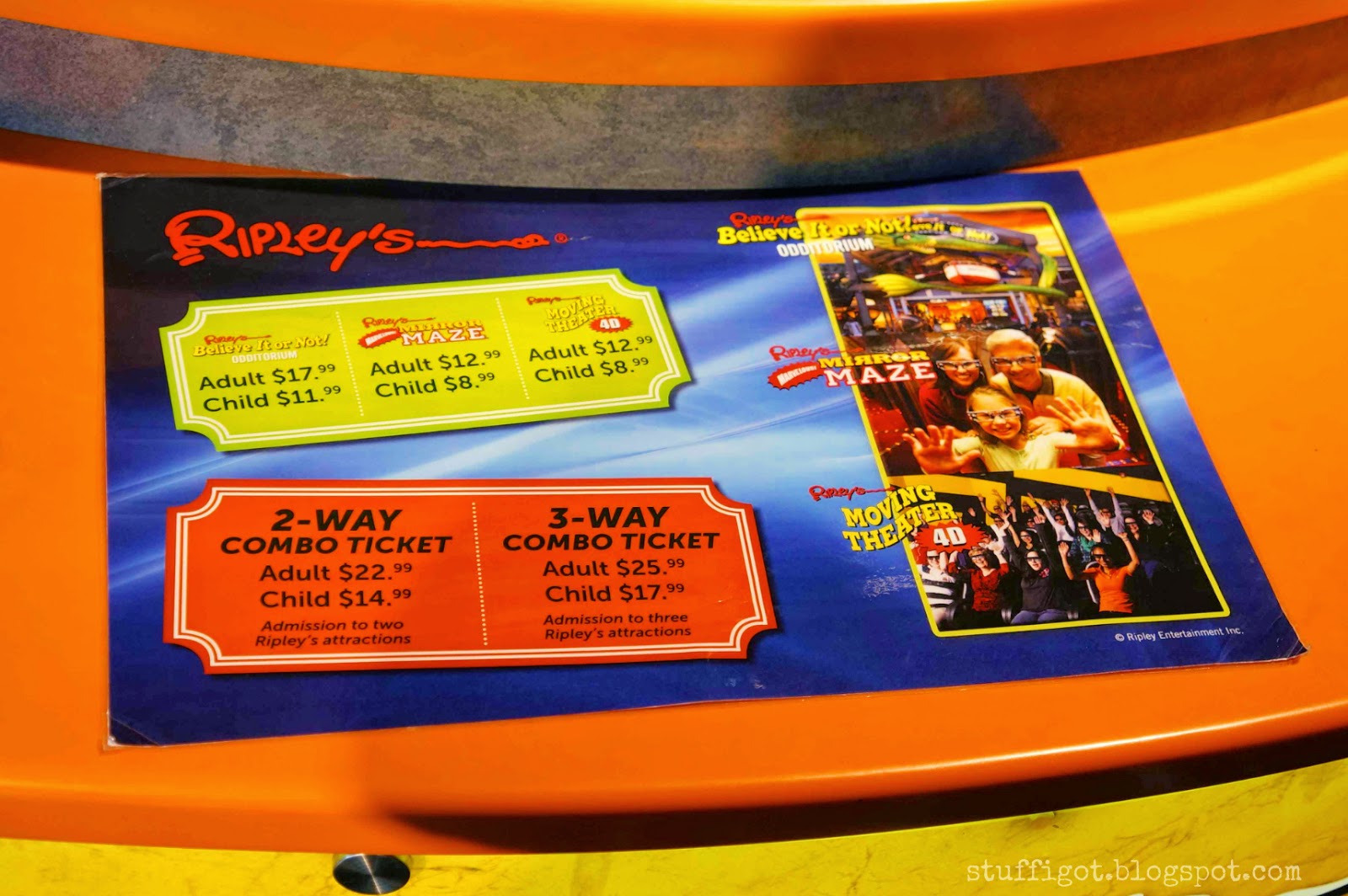 After purchasing your ticket, you scan your ticket and enter through the turnstile.  There are several exhibits in the lobby, including a robotic dinosaur, a wooden car that's actually a boat and an exhibit about the World's Tallest Man.   We didn't linger long in the lobby, since my boys wanted to go upstairs to the main part of the museum. 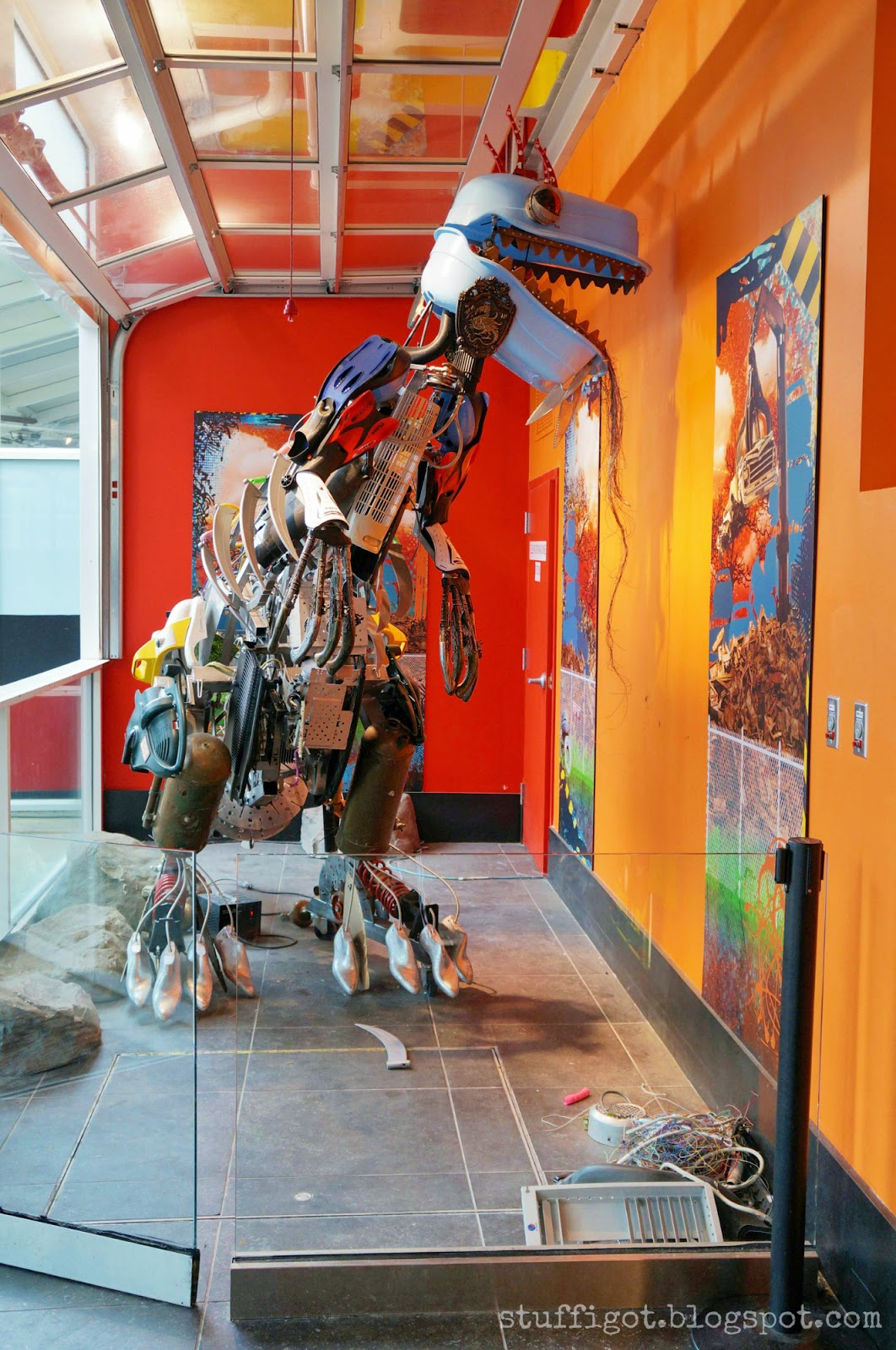 You can either take the staircase or, like we did, take the elevator. We had the baby and my four-year-old in the double stroller.  Mr. Ripley greeted us as we exited the elevator.

There are exhibits all around you.  Take the time to look at everything.  Read the signs, open drawers and play.  I regret not spending enough time looking at all the exhibits.  The kids sped past a lot of the exhibits and were more drawn to the ones they could interact with.

One of the exhibits that caught my 7-year-old's eye was this giant penny made of more than 84,000 pennies.  He's learning how to count money right now in math, so we turned it into a math lesson and had him convert 84,000 cents into dollars.  Fun and educational! 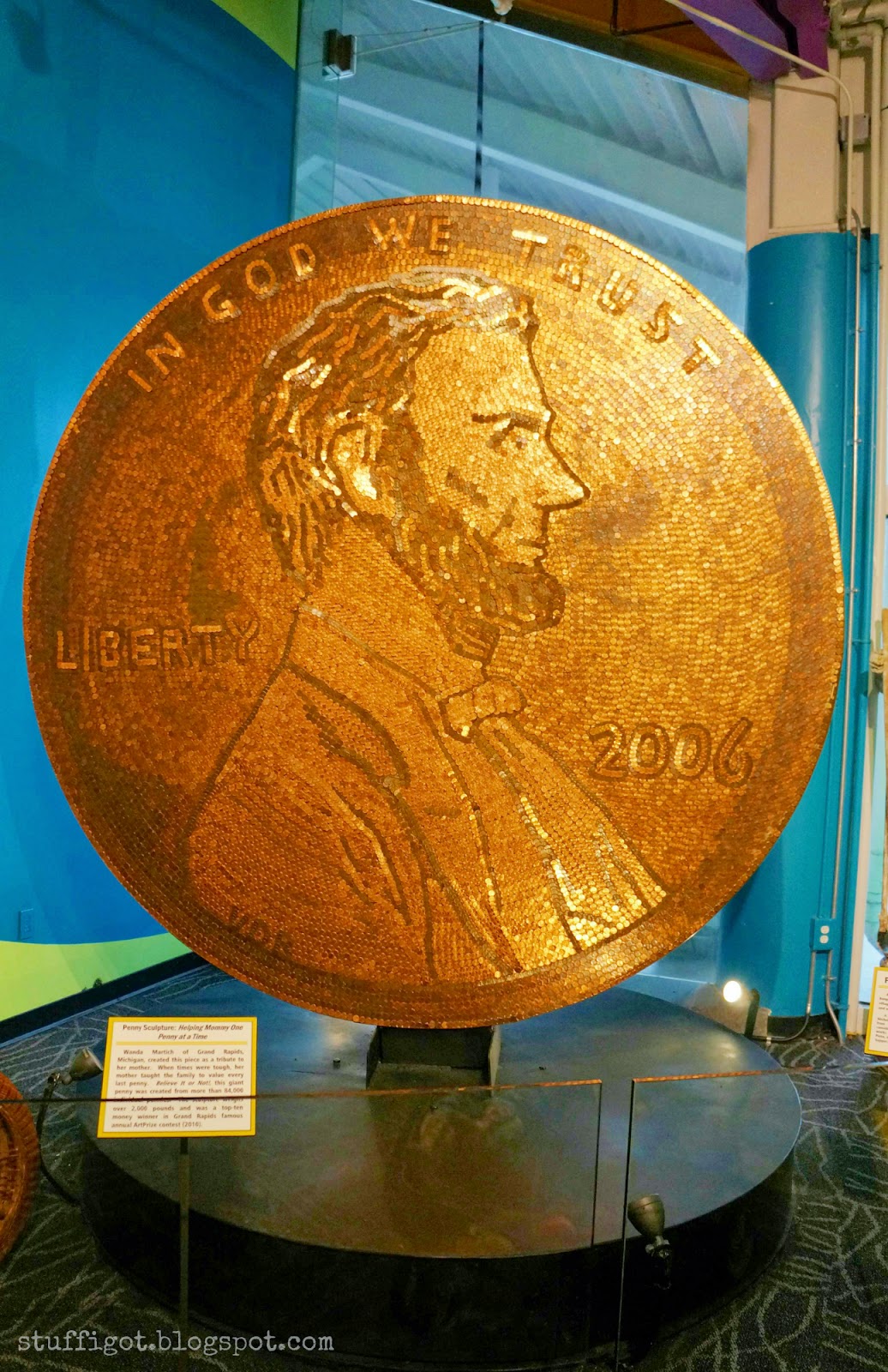 My four-year-old started in the stroller, but wanted to get out pretty much as soon as we started looking at all the exhibits.  He wanted to see everything and play.  Even my one-year-old wanted out of the stroller.  She saw how much fun her brothers were having and wanted to play, too. 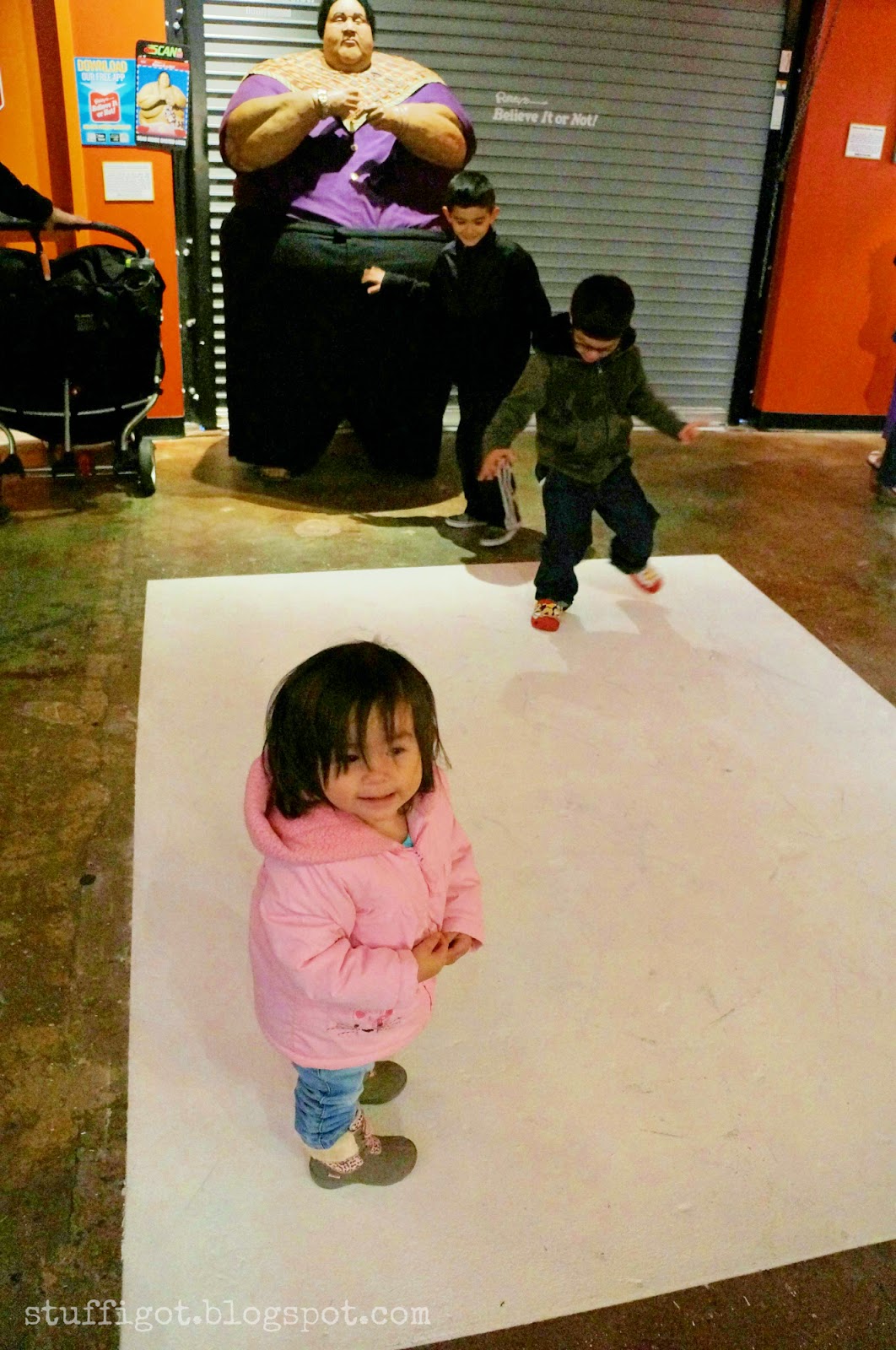 Another exhibit my older son was drawn to was this portrait of Justin Beiber.  Not because he really knew who Justin Beiber was, but because it's made entirely of candy! 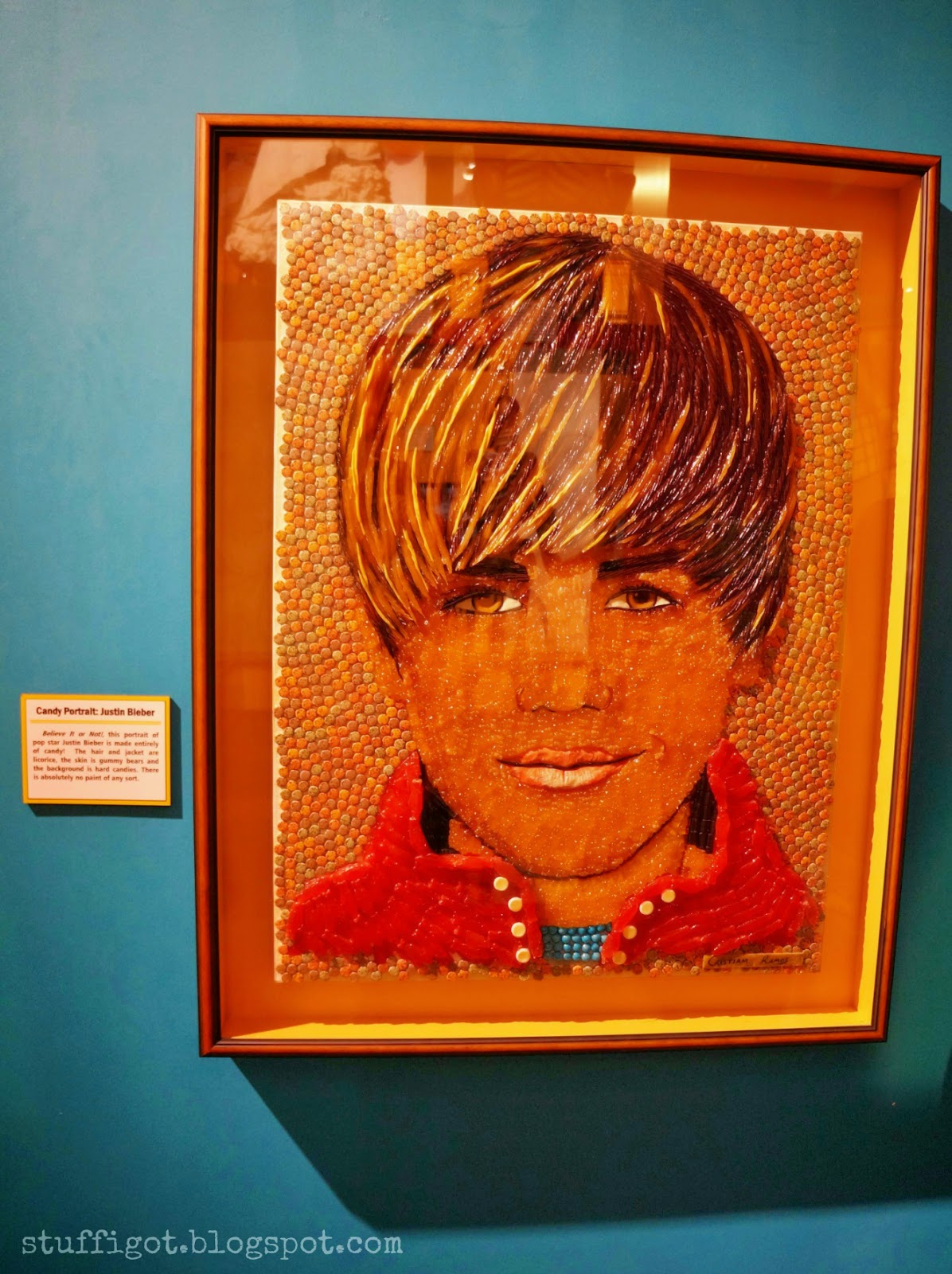 One of my favorite galleries in the museum had a model of Hogwarts School of Witchcraft and Wizardry made from over 500,000 matchsticks! 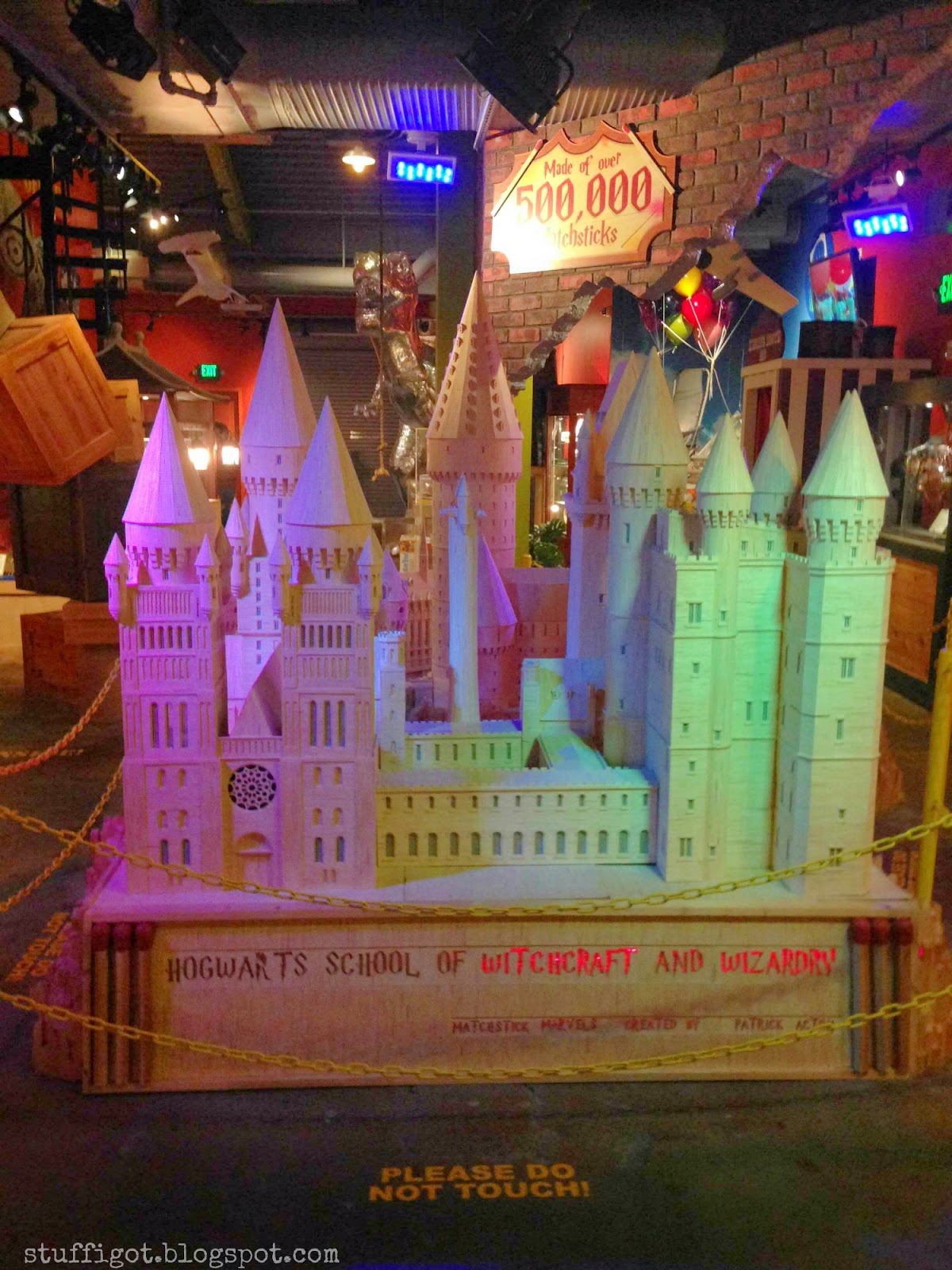 They also had a candy portrait of Harry Potter and a shawl with a disappearing Hagrid. 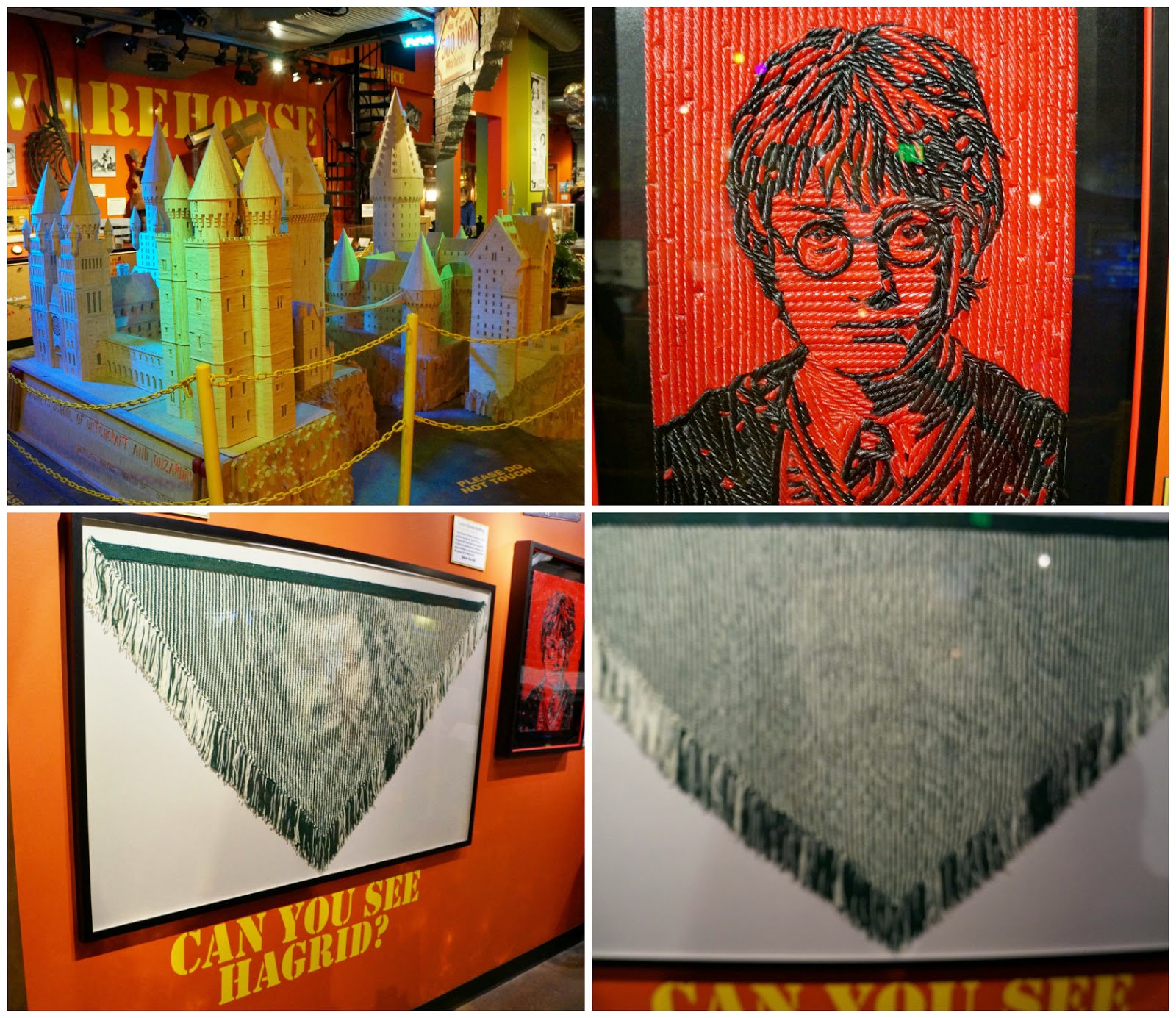 One room that even my husband had fun in had a lot of interactive exhibits and brain teasers on the wall.  This was where we spent a lot of time playing. 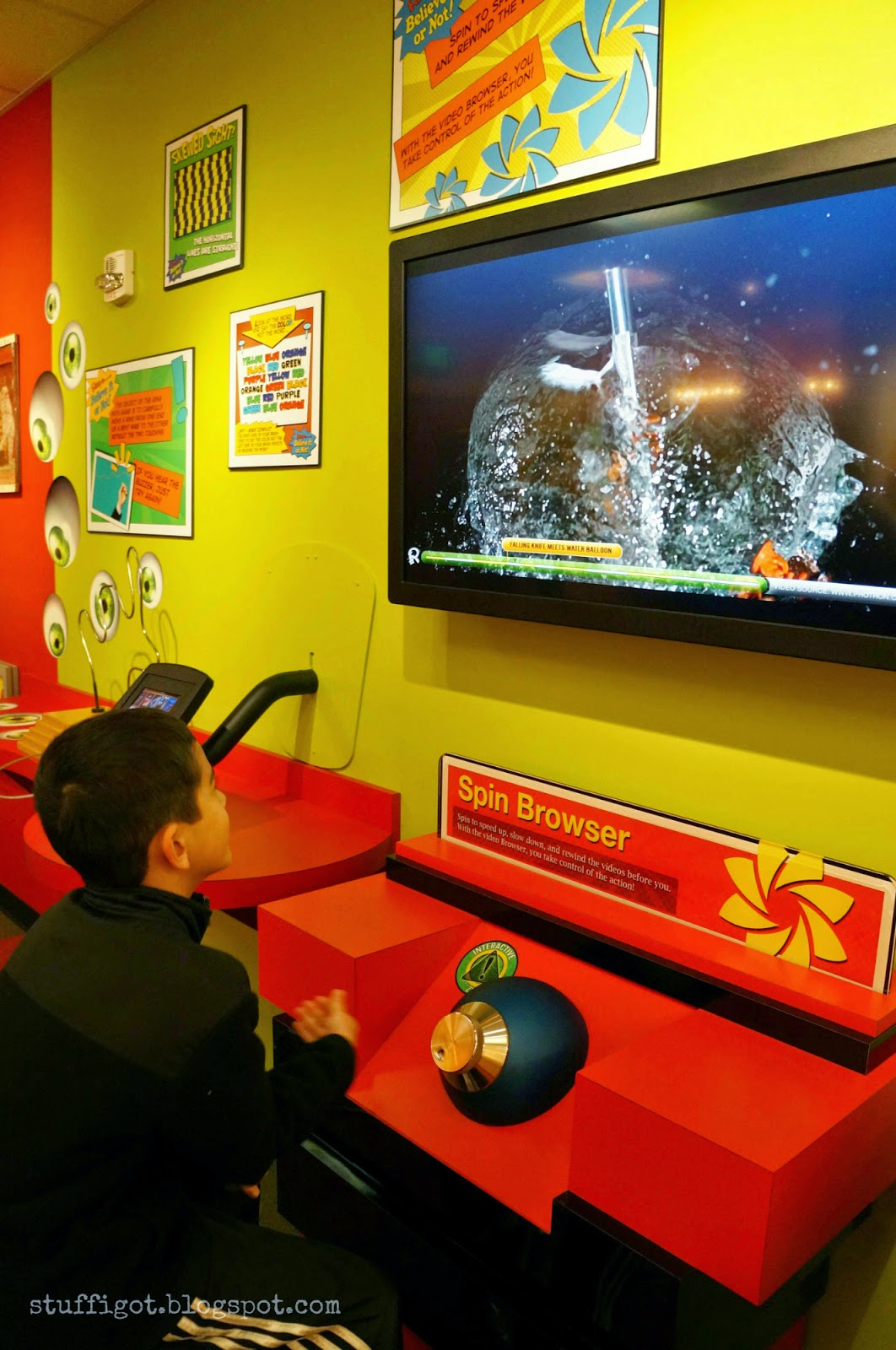 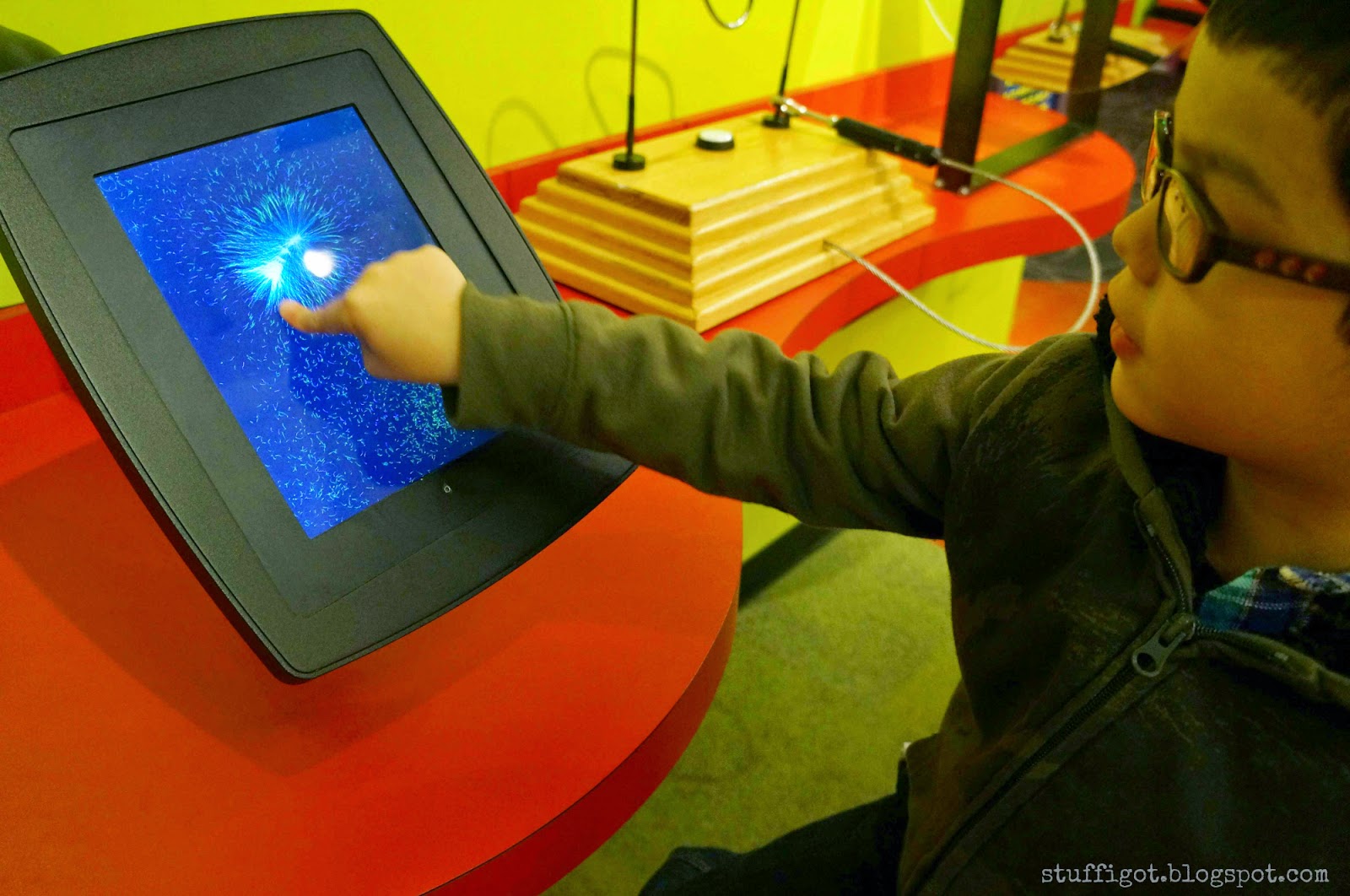 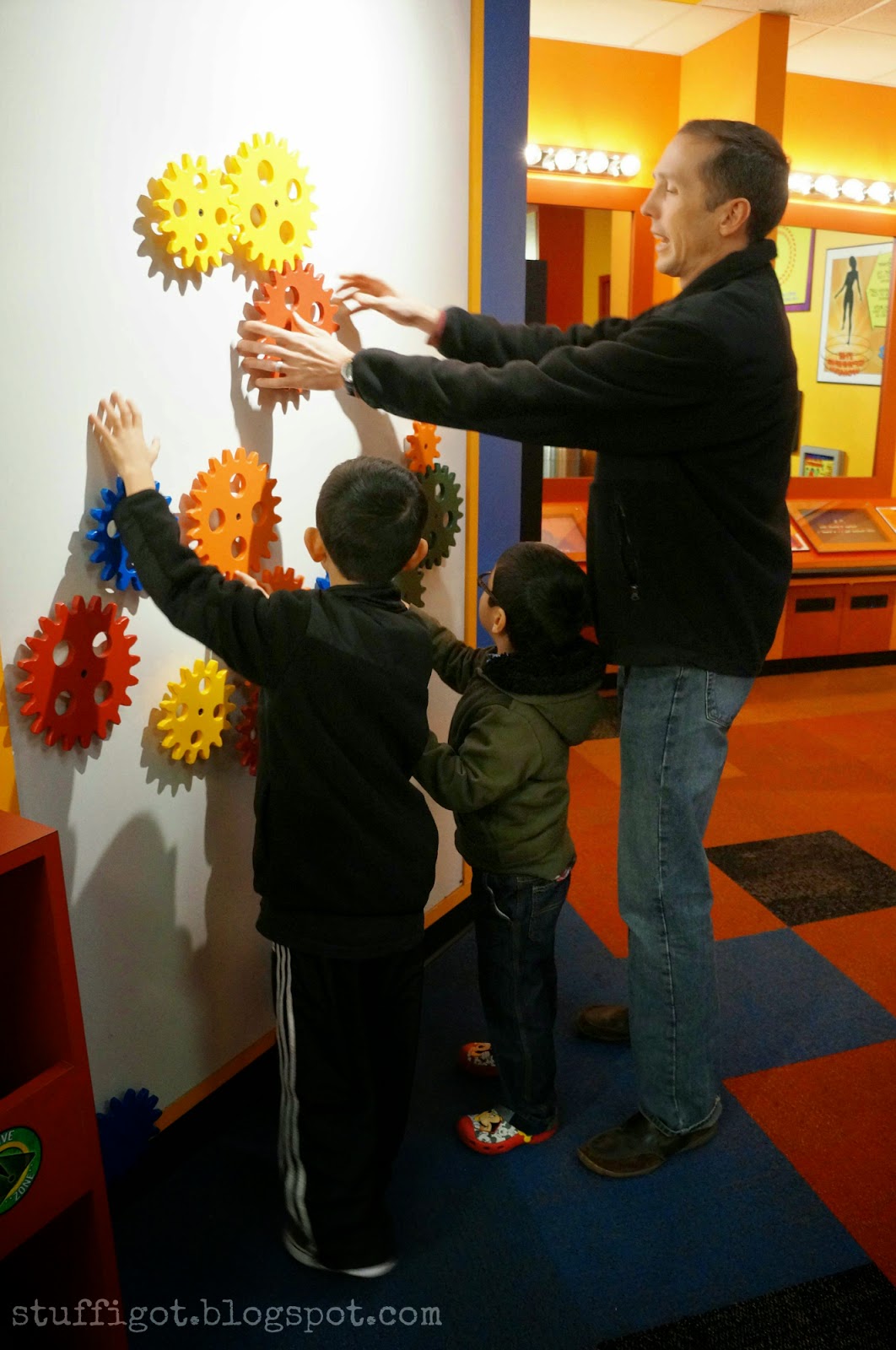 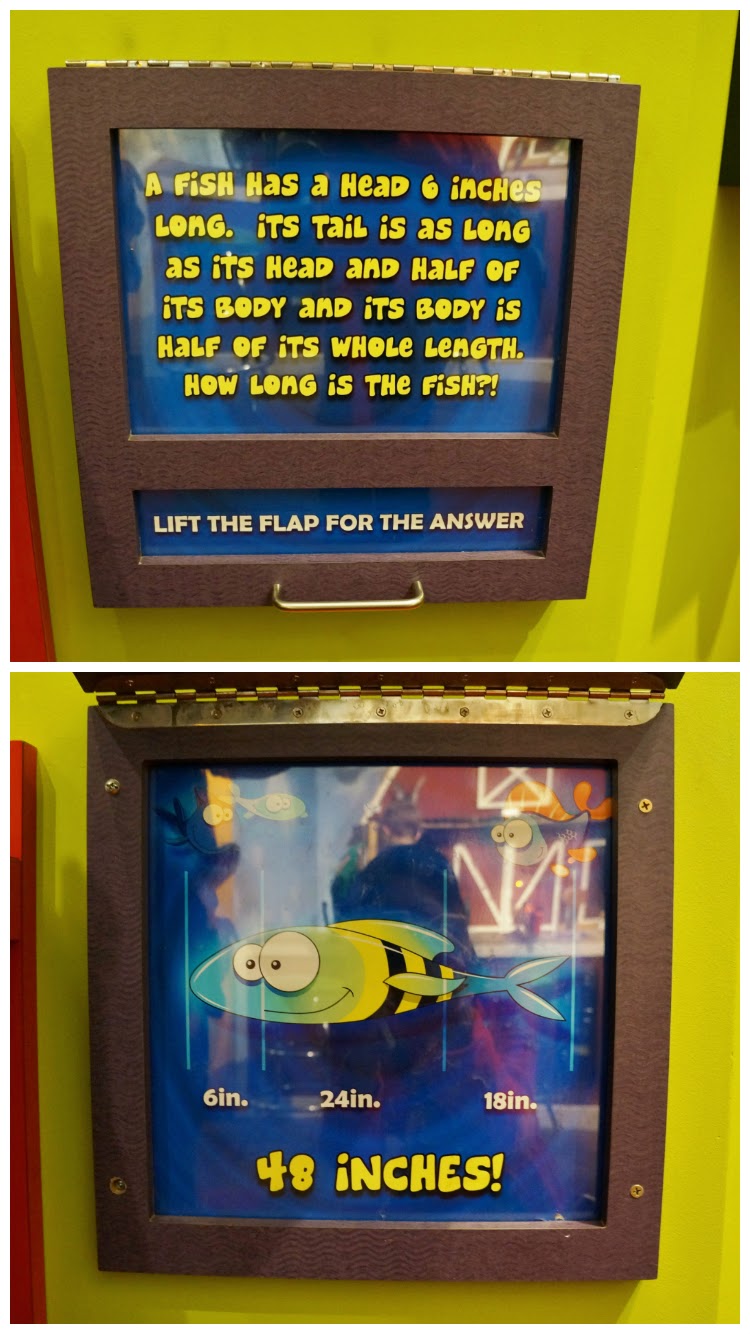 After going through the Odditorium, we made our way to the Marvelous Maze of Mirrors.  Right before you enter, there are some fun house mirrors that we had fun playing with. 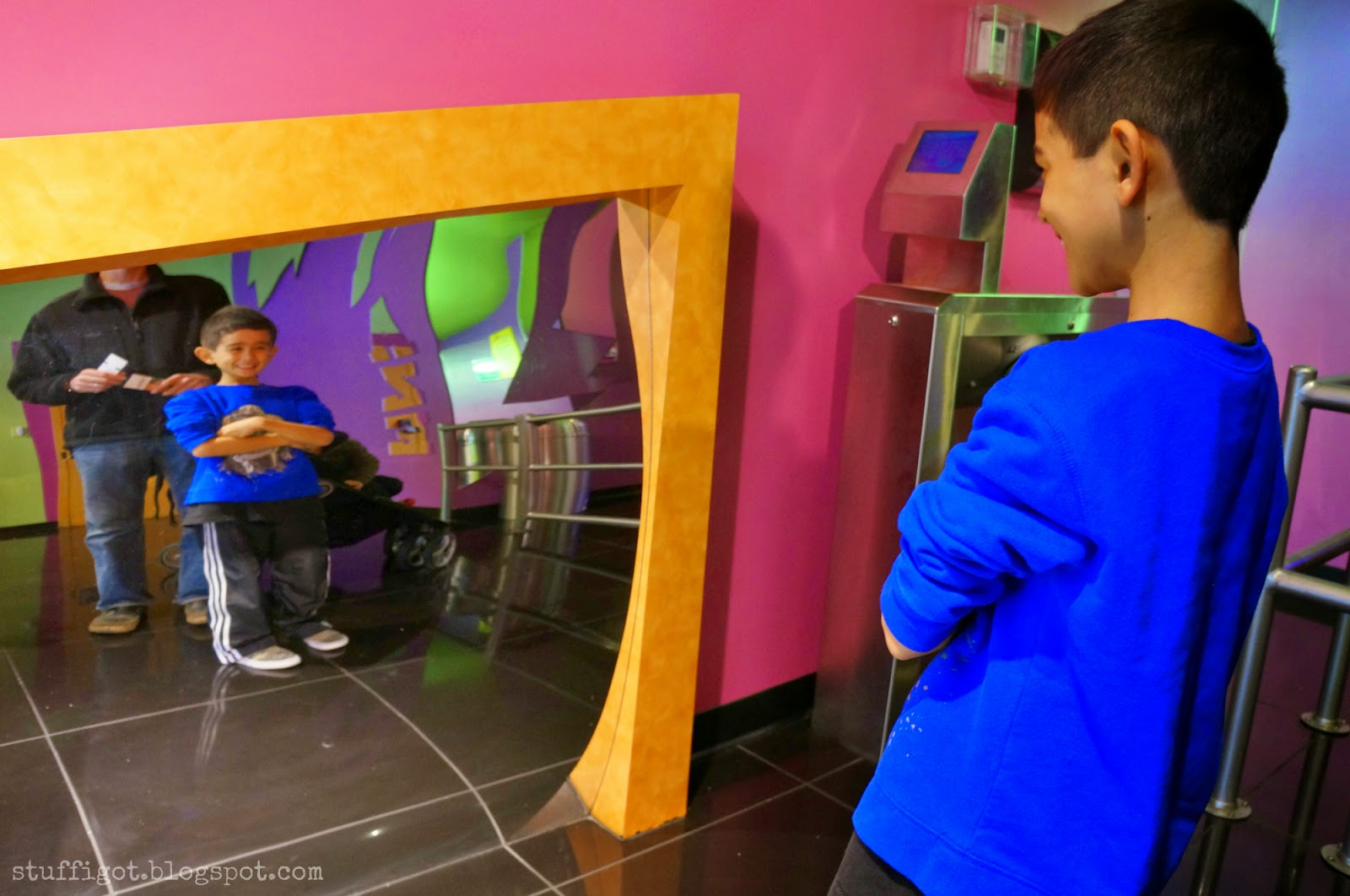 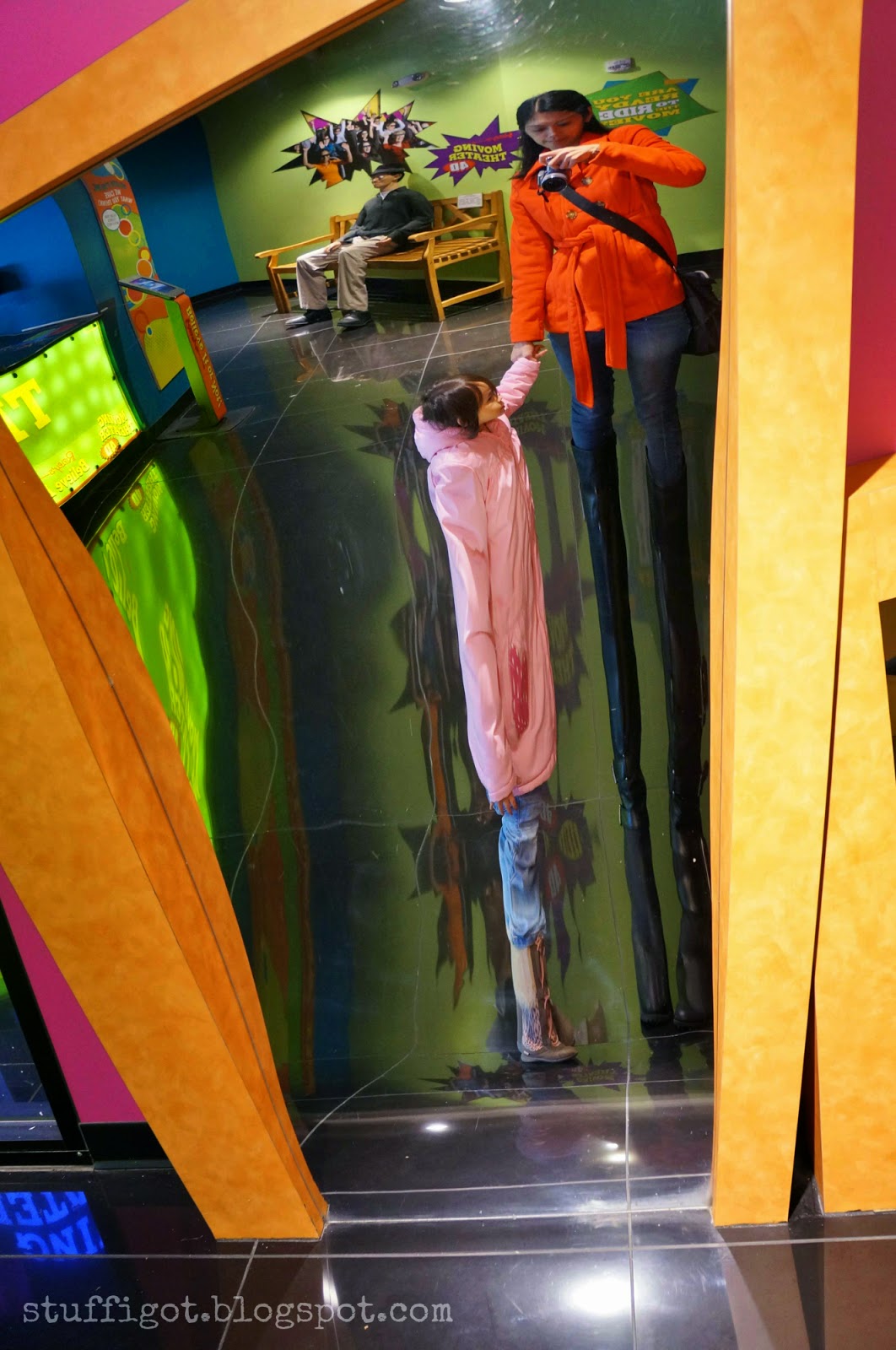 After you scan your ticket and go through the turnstiles,they hand you plastic gloves to put on so you don't smudge the mirrors.   I would have gotten so lost without the help of my 7-year-old.   Several times I found myself following my family and then realizing I was only following their reflection!  I even bumped into some mirrors with the stroller. Oops.  It didn't take long, though, to make our way out of the maze.  We would have gone through a second time had the baby not been so upset.  She was getting hungry and cranky. 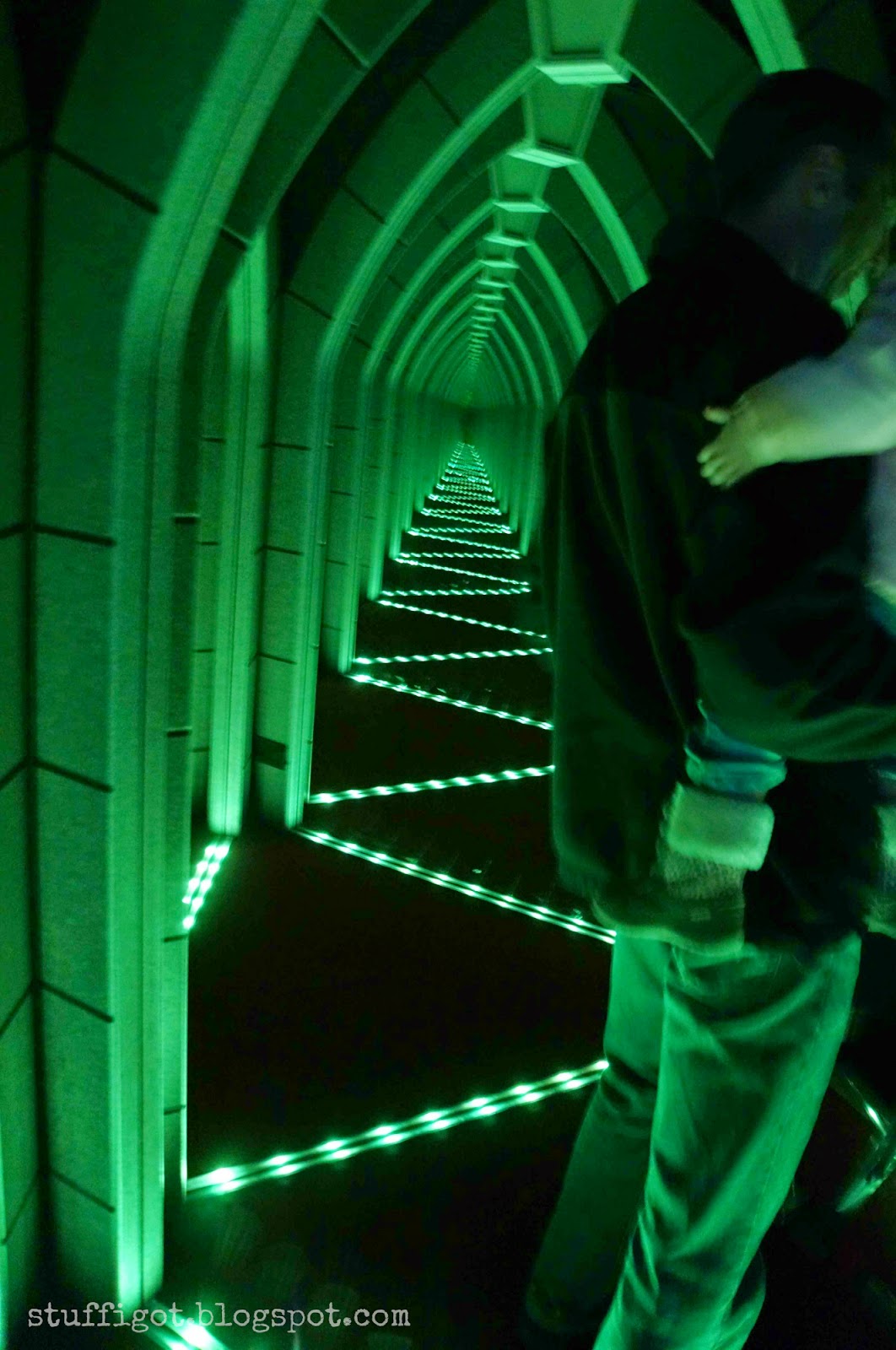 After leaving the maze, we were told it would be about 15 minutes or so before the next movie in the 4D theater.  We ended up not sticking around because the baby was probably not going to sit through it.

Overall, though, we had a great time!  We plan to go back so my 10-year-old can come, too. She was on a field trip to Williamsburg, so she was okay with missing out on the museum.  I think she'd have a fun time, though.  Plus, I think she'd actually stop and read everything!

Ripley's is open 365 days a year and tickets for the Odditorium start at $17.99.  From now until the end of the year, you can save with this coupon and get 1 FREE attraction when you buy 2!  You can even skip the lines and purchase tickets from home!

Proud Member of The US Family Guide Network